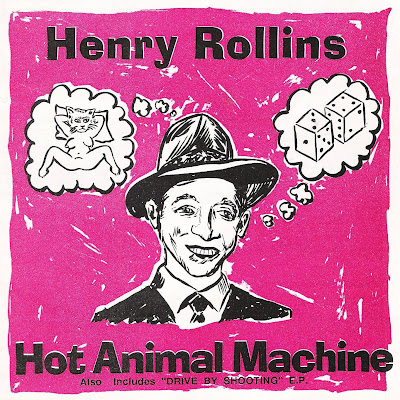 Aside from the TV Party single and a few other things half heard whilst hanging around on YouTube, I'm not that familiar with Black Flag other than as the band with which Henry Rollins was involved before he ceased to be involved with them, so there's a strong possibility I'm coming at this like the man who reviews a Ringo Starr album without having heard any Beatles records; but fuck it...

I guess after the break up of Black Flag, Rollins found himself having to carve out new channels by which to vent his fevered work ethic, and so Hot Animal Machine should probably be regarded as the transitional effort of an artist firing off in all directions and seeing what happens. The rockier numbers, or at least those paying more obvious dues to Chuck Berry, sound roughly as you might expect coming from a former member of Black Flag - muscular, hard, funky rock although with more of a garage sound than the metal workouts that would later characterise the Rollins Band formed with Chris Haskett, who also handles the guitar here by the way. The other tracks veer off into jazzier territory, soundtracks to monologues of the kind with which Henry kicked off his spoken word career, and are actually fairly similar to the sort of material that ended up on Short Walk on a Long Pier.

It's all powerful, but somehow the range of styles is almost too broad, resulting in something resembling a compilation album. Black and White or Followed Around sound pretty much like the Rollins Band, whilst other tracks have more of a Stooges feel, and the more conversational numbers roughly suggest someone or other was listening to those early Swans albums a lot. The effect is further emphasised by the inclusion on the CD of the Drive-By Shooting EP as recorded under the name Henrietta Collins & the Wifebeating Childhaters - harrowing Gira-esque sound poems, a cover of Wire's Ex-Lion Tamer, and a title track which could easily have been the theme song from a Cliff Richard film but for the subject matter:

The variety is disconcerting, a group of songs - or at least tracks - which don't quite fit together, like finding a straight cover of Little Red Corvette on Throbbing Gristle's Second Annual Report. This isn't to say there's anything wrong with any of the tracks individually - indeed there's not a weak number here - only that one listens to some of them in quite different ways to others, and it makes for a strangely uneven album compared to later efforts bearing Rollins' name.

Still, I'm not complaining. The rockier numbers are as intense as anything he's ever recorded, the gut-busting black humour is in full effect, and the front cover is drawn by Mark Mothersbaugh of Devo, so what's not to like?
Posted by Lawrence Burton at 08:21