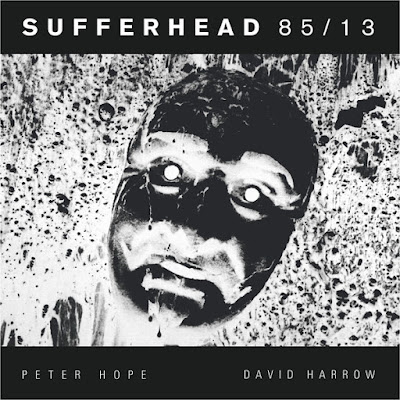 Here's a couple of EPs originally released by Hope and Harrow in 1985 and 2013, now reissued as a single album; which works surprisingly well despite the three decade gap between the original sessions, with five tracks per side adding up to a nice and tidy album length. The 1985 material sounds very much of its time and geography - which isn't a criticism - very much birthed from the same milieu as Hula and digital-era Cabaret Voltaire with hard gated beatbox rhythms pulled out of shape by horns, tapes, even some metal bashing, then formed into something fierce and bluesy by Hope's powerful voice, yielding, I suppose, sound pieces as much as songs, like short, moody films lacking only their visual component. It's quite harsh, almost not quite musical, and yet there's a kind of funky tension keeping everything tight, keeping it all from springing out of shape. Think Tackhead pushed further, twitchy and sleep deprived.

I tend to listen to a lot of music first thing in the morning while doing things around the house, washing dishes, wrestling cats, cleaning up shite and so on; which has begun to feel a little awkward since my wife's company decided, in their finite wisdom, that they could make a great saving by having her work from home while hiring out the office space to someone else. She isn't too happy about the arrangement, which means I'm additionally a little self-conscious about my morning soundtrack, given her arguably more traditional musical tastes. As she has made clear, I'm quite welcome to listen to what she refers to as that pipe banging music, but I nevertheless feel a bit uncomfortable about blasting her with DDAA or Headyello first thing.

Getting back around to the point, I sensed funny looks coming in my direction when I played the aforementioned 1985 material, although Mrs. Bricklaying seemed to acclimate to it after the first couple of days. More surprising, at least to me, was how much she seemed to enjoy the second side of the record, the material from 2013, even asking who was responsible and what the tracks were called. Side two maintains the mood but otherwise slows everything to the pace of a comedown with intricately woven sequencers dominating, and less of a temper. We're still on the short, moody films, but now they feel like film noir, mysteries half seen from a rain soaked doorway.

Internet research reveals David Harrow as having worked with Jah Wobble, Adrian Sherwood, and others already resident on my shelves, which makes a lot of sense given the sonic territory he inhabits; and his soundtracks provide a perfect complement to Hope's image-heavy narrative. I realise I seem to have gotten into the knee-jerk habit of unquestioningly buying everything issued by these two on the strength of name alone - limited run vinyl, CDRs, lathe cut things and what have you - but they deliver every time so it seems justified, and I'm already looking forward to the Revbjelde album.
Posted by Lawrence Burton at 12:37