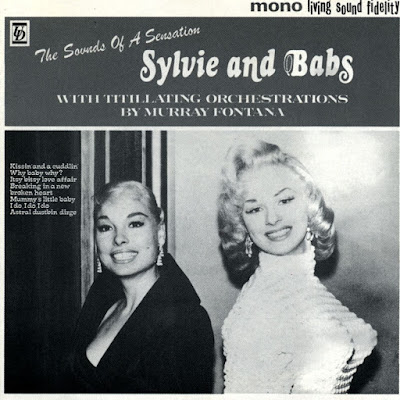 Yes, I'm well aware of it being Nurse With Wound, thank you very much, but I'm pretty sure it was listed as above when released, the reason being that Steve Stapleton regarded the Hi-Fi Companion as something quite separate and distinct from the Nurse With Wound canon, which it sort of is, or at least was. So I'm sticking with the original version of the story, plus I seem to recall the United Dairies mail order list had this down as something other than Nurse With Wound, and listed under comedy for what it may be worth - along with Hastings of Malawi, whatever the hell that was.

Of course, it's now difficult to get through a whole day without having to hear some cunt's aspirationally humorous plunderphonic deconstruction of existing bits of music, but back in 1985, 'twas not yet so overegged a pudding as it has become, and possibly because no-one had a sampler so it was harder. Sylvie & Babs were principally Stapleton and the gang making music with bits of other people's records, and - so I gather - making it the extraordinarily complicated way by splicing together inch thick strips of studio tape and so on in the spirit of Pierre Schaeffer and those guys as opposed to just sitting next to the radio with one finger on the pause button and then selling the end result to people with a photocopy of your knob on the cover like Hamilton Bohannon* would have done.

To start again at the beginning, if you've ever described Nurse With Wound as industrial, then you're a fucking clown; you wear big red shoes; you have a bowler hat on your head with a giant flower coming out of it; and when you drive your car, you honk the horn twice every few yards and the doors have usually fallen off by the time you reach your destination, which will almost certainly be a clown shop which you're visiting in order to make purchase of clown supplies. This description also applies, albeit to a lesser extent, if you've ever described Nurse With Wound as a noise group or - ugh - sound artists; although Nurse With Wound are very much about sound and the psychological and physiological effects it can have on the listener: so it's definitely music, but works more like a sonic analogy of the art of Kurt Schwitters, Max Ernst, Marcel Duchamp and other Dadaist types than does music with tunes, verses, a chorus, or which is made using musical instruments. The next sound you hear on a Nurse With Wound record may often be the last sound you would expect to hear depending on whatever has gone before, which distinguishes them from those acts more obviously reliant on repetition. It can be hard work listening to Nurse With Wound, but also very rewarding because it's never quite like anything you will have heard before, possibly including previous Nurse With Wound albums. They're not something you can listen to all the time, but every so often, you'll find there's nothing better if the time is right.

Well, that's the theory anyway, and I haven't actually heard the last five-hundred or so records so for all I know he may be cranking out handbag house with Nick Griffin these days, but for the sake of argument, let's just pretend it's still 1985 and that I'm right. I failed to buy this at the time because there was other stuff I wanted, and Nurse With Wound were an acquired taste even by my standards; also, it wasn't that easy to get hold of their stuff. I had Insect & Individual Silenced, which was fucking great, but apparently not so great as to keep me from flogging it when I decided I really needed those first two albums by You've Got Foetus On Your Breath. Millions of years later, I find this on CD and notice that I actually know three of the people who appeared on here amongst the lengthy list of collaborators, which is weird. In fact, I've been in bands with two of them; and one of them was Andrew Cox who was my bestest buddy for a while, and who is no longer with us, and who I still miss like crazy; so I couldn't really not buy it.

I suspect all those bargain basement cassette versions of Nurse With Wound have spoiled the real thing for me over the years, because in 2017 Sylvie & Babs sound drearily familiar rather than weird and surprising, at least on first listen. The key seems to be getting past the point of trainspotting where it all came from - snatches of My Boomerang Won't Come Back and the like, which seem intrusive whilst they remain familiar, although maybe that was the point. After a few spins, it picks up - which again is the opposite of what I expect to get from a Nurse With Wound record given how they seem so often reliant on shock and surprise; but this eventually settles into a sort of musicality suggestive of narrative which is almost certainly in the ear of the beholder. I suppose this could be what differentiates Sylvie & Babs from Nurse With Wound - unless it's just my lugholes - namely that increasing familiarity with the material brings some sort of pleasure, just like you get from Sting and Coldplay, beyond which, one is drawn to focus on the bizarre acoustics at play. That made sense in my head when I thought it.

The Sylvie & Babs Hi-Fi Companion is decent, and it's nice to hear Andrew's voice again - repeating the phrase it ain't necessarily so, in case anyone was wondering - but it isn't startling, and more than anything it makes me wish I'd found some other means of financing my purchase of those early Foetus discs. Time to get looking for another copy of Insect & Individual Silenced, I suppose.

*: Name changed so as to protect the annoying.
Posted by Lawrence Burton at 01:21