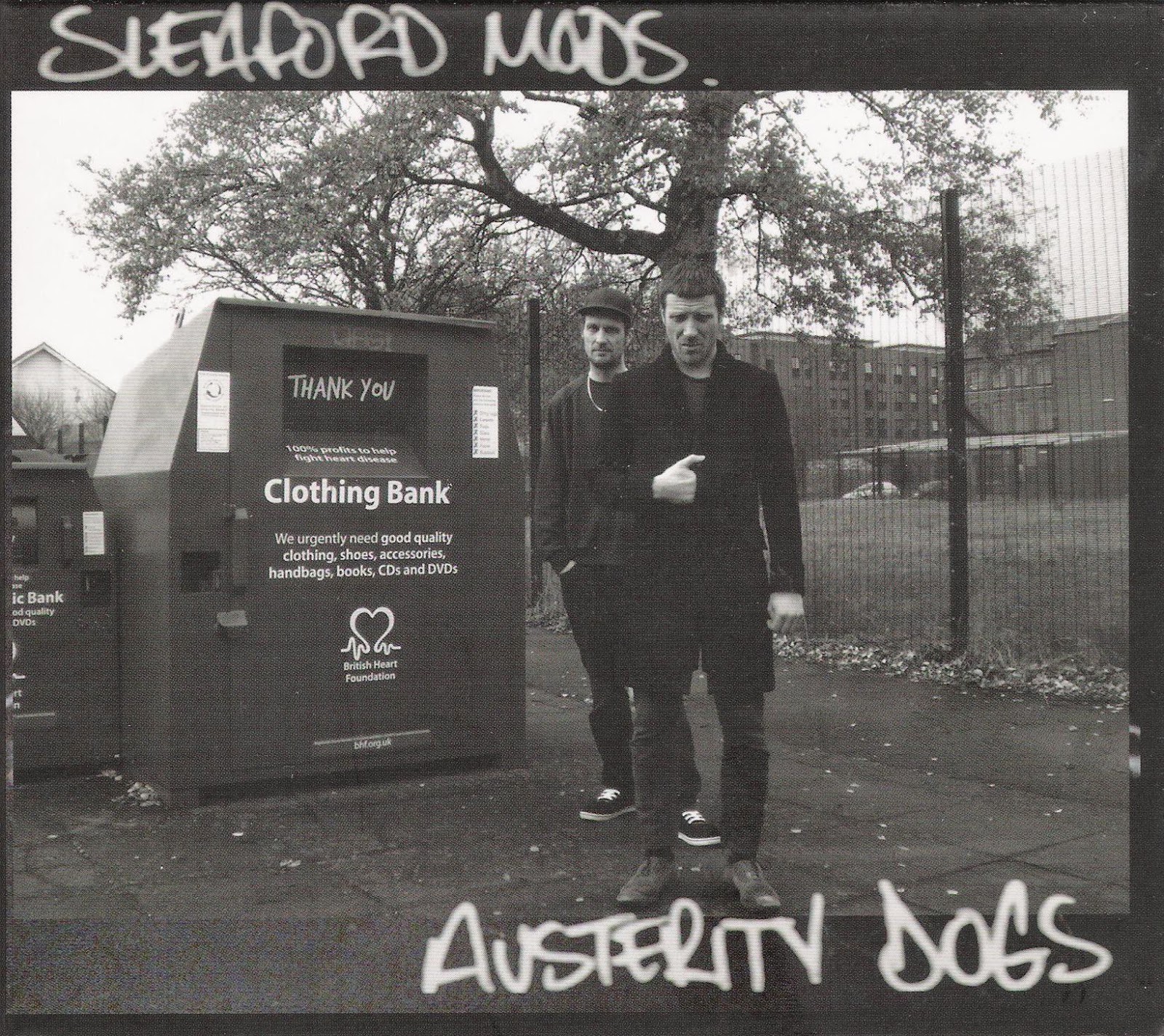 It seems that in certain quarters there is a generally held view of Sleaford Mods as being the next big thing, perhaps suggested by a recent write-up in Mojo or some magazine of that sort. This seems unusual in so much as somehow I've heard of them prior to the predicted enmassivisation, and that they're fucking great, in contrast to the general trend of the last few hundred next big things being mostly toss, Neutral Milk Hotel for example - Neutral Toss Hotel would have been more like it...

Already the usual suspects are queueing up to forge the definitive summary of the Sleaford Mods sound resembling a fusion of John Cooper-Clarke and the Wu-Tang Clan, which it doesn't; or The Fall, which fails to get any closer, as is usually true of almost every band ever described as sounding like The Fall; or they're punk hop, whatever the fuck that's supposed to be. I'm not sure if anyone has yet suggested Suicide fronted by Pitman on the grounds of blue-collar rude words spat out in an East Midlands accent; or Nocturnal Emissions circa Songs of Love and Revolution mashed up with Skinnyman; or Swans covering Splodgenessabounds because it's an amusing image and not much worse than any other description, but if not, you can have those for free.

Sleaford Mods build songs up from raw loops of what sound like someone's rehearsal tapes captured on a mono-portable cassette player in 1978, and a sort of Tourette's attack of lyrics that really capture the feel of turning up for agency work at a Parcel Force depot at 6AM on a freezing Monday morning only to be told the failed Footballer's Wife from said agency was too busy painting her nails to send your papers through to the gate; and so you're screwed once again. Specifically, Austerity Dogs sounds to me exactly like life in England just before I escaped, at least life for the belching majority who somehow failed to end up in their dream jobs once they left school. Sleaford Mods are not only the opposite of  anything you will ever see on The X-Factor, one voice of the underwaged and supposedly unemployable silent masses against which the British Government has recently declared out and out war, but they're one of those once in a lifetime bands - depending on your definition of what constitutes a band - of such fierce and comic honesty that almost anything stood next to them will inevitably end up seeming affected, ridiculous, and divorced from reality.


The only phone on the road is chlamydia-ridden phlegm stained,
where the fuckers sell processed peas as weed.
It's cold when I look out my window.
Another local pub burned down to the ground.
I hated those fucking Motown nights anyway.
It's Jive Bunny meets Lucy fucking Pinder...
...on ice!

To be honest, Austerity Dogs is so good as to make all efforts to write about it completely pointless - simple, powerful music and brilliant words, and I just can't stop listening to the fucker. As with the cold leftovers of last night's kebab hastily consumed on the way to work in the hope of staving off a hangover, it may not be pretty but it's undeniably nourishing.

Available from Norman Records and probably some other places.

Posted by Lawrence Burton at 08:47