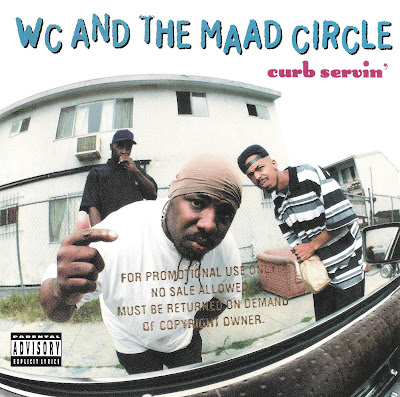 Okay let's try again, and hope that this time I can cope with writing about that there hip-hop without turning into Tim Westwood and having to spend the next five years pretending it was someone else who wrote all that ludicrous crap about trunk bangers and keepin' it real; and if you have no idea what I'm talking about, then let's not rock the boat by asking all sorts of stupid questions.

WC, as certain comedians might note, is a rapper apparently named after a toilet, but let's face it, not one of them is going to note it to his face. William Calhoun, as he was named by his parents, rose to minor fame with the Maad Circle - Maad standing for Minority Alliance of Anti-Discrimination because it was the 1990s - although Coolio of the same outfit is probably better remembered due to Gangsta's Paradise being such a hit. WC later joined Ice Cube's Westside Connection with whom he recorded Bow Down - arguably one of the most entertainingly angry records ever made - and has since squirted out a string of solo albums that really should have earned more recognition; and Curb Servin' was one of the early ones.

I somehow failed to pick this up when I spotted it in a shop in Camberwell many years ago, possibly because it was on vinyl and although I love vinyl, I prefer my rap on CD as it sounds better on the move for some reason. So far as I understand it, this has always been something of a concern for those involved with west-coast rap and hip-hop, which tends to be produced so as to sound more menacing when played in your car, as opposed to on your porch with all your pals stood around freezing their nadgers off and drinking hot cocoa.

Some people get it right, and some get it wrong in assuming that something which sounds so simple must be pretty easy to make. WC seems to be fairly close to unique in rap terms in so much as he's mostly been getting it right since day one, with scarcely a weak track to his name let alone an album. Of course, I've no idea how much the lad is himself responsible for the music which underscores his wordy fulminations, at least not beyond possessing the good sense to have everything produced by DJ Crazy Toones; but then a career this consistent probably doesn't just happen by accident.

WC may not be the greatest rapper of all time, but fuck it, he's probably so close as to make no difference, and it would be difficult to mistake his singy-songy tongue twisting acrobatics for anyone else. The beats too are the perfect compliment for these stories, resembling a more threatening Kool & the Gang, somehow bursting with flared joy whilst breaking into your home to steal your TV - like being beaten up by a really happy guy, if you're prepared to accept that as something worth listening to, which I can assure you it is.

Farting bass that's as funky as you'll need in this lifetime, that leisurely west-coast Roger Troutman snare that sounds like a fat man sitting down suddenly on his car keys, and some real storytelling of the sort you probably don't want to hear but which will nevertheless do you good - I don't yet understand why they haven't made this guy president.
Posted by Lawrence Burton at 12:15