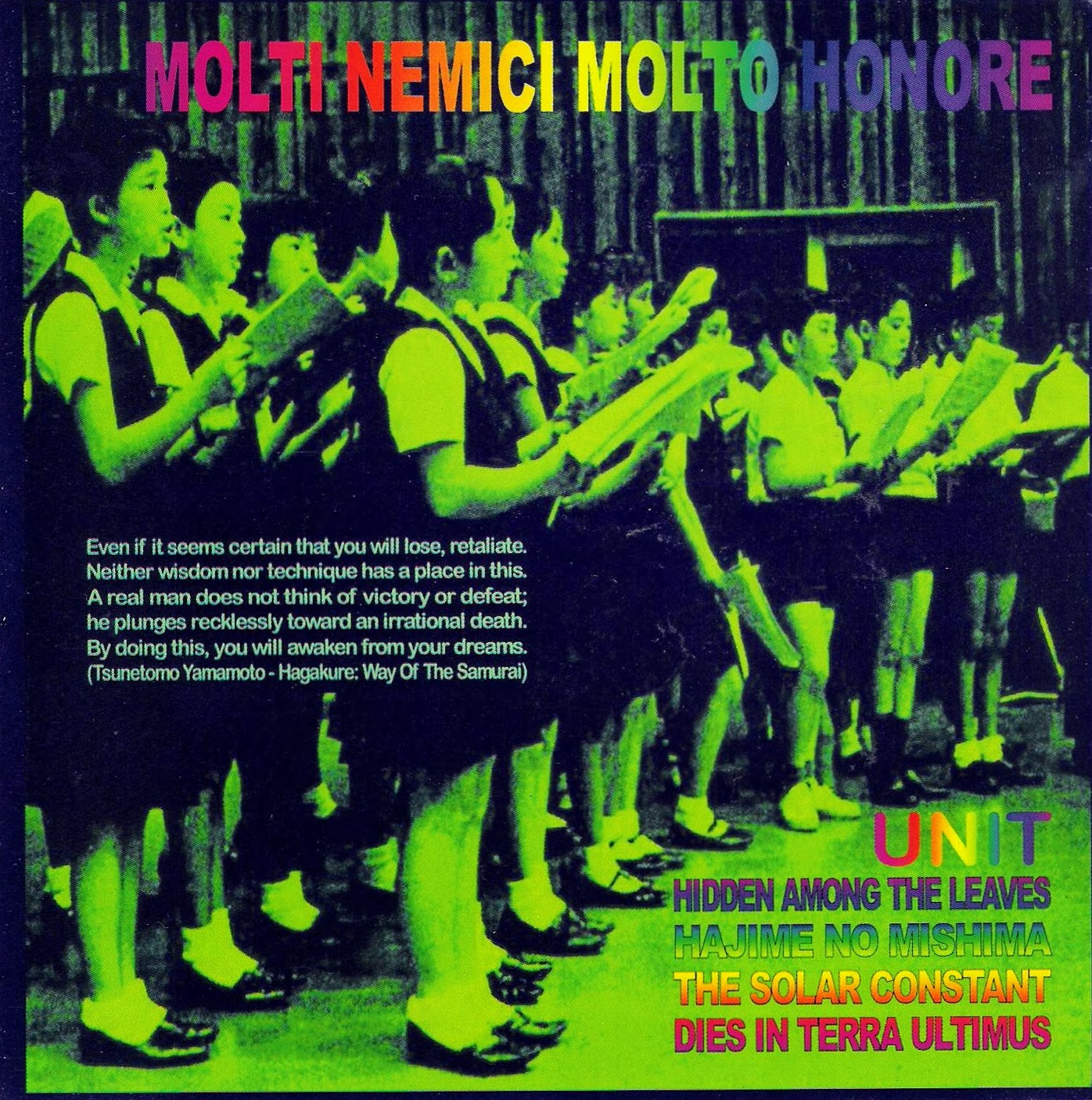 Today's comedy industrial subgenre terms itself martial industrial, a musical affectation which favours the sort of pseudo-classical pretensions adopted by those who take themselves far too seriously, and tend not to be overburdened with experience of actual classical music, excepting perhaps a bit of Laibach, and that Robert Wagner because he was the Death In June of his day, and the fact that Hitler liked him is neither here nor there. The shorthand is that martial industrial is the work of stern-faced developmental teenagers who drown Elgar samples in a ton of reverb in hope of evoking the atmosphere of a military funeral, usually slapping the end result on a CD with a photograph of a stone eagle on the cover and titled Europe's Sorrow or The Defeat of the Dark Ones or something of that sort. The most entertaining aspect of such bands - if you can really call some smacked-arse-faced little wanker in a black shirt a band - will generally be the associated website which usually features a testy if barely literate disclaimer stating that just because a guy happens to be interested in racial purity or marching up and down whilst saluting, doesn't mean he should have to put up with the unfair and uninformed criticisms of those who don't know nothing accusing him of that which he will not actually name on his website just in case anyone has yet failed to make the wild leap required to associate those who bang on about the sanctity of white culture with raving Nazis; although to be fair, entertaining may not be quite the right word here. Anyway, I suppose it terms itself martial industrial through the promotion of martial imagery whilst aspiring to achieve the sort of effect that would have arisen from Genesis P. Orridge turning up on Gardeners' Question Time to playfully and subversively drone on about plants resembling the human penis; and the lesson here is that anyone trudging along under the banner of martial industrial is by definition a shitehawk, and classical composition is best left to those who know what the hell they're doing.

As a former member of UNIT, I may not be the most impartial judge of a disc such as this, although in my defence, and in case it supports some notion of my objectivity, I have to say I haven't found myself prone to gushing over much that has been released by the band since I departed back in whatever year it was - too much xylophone, or whatever the hell that thing was that seemed to turn every other song into a Ray Conniff Singers tribute, and just too much in the vein of School Farm Bungalow which remains more or less my most hated album of all time. Of course, amongst the great strengths of UNIT's Andy Martin are his eclectic tastes, absolute singularity of vision, and tendency to swerve off in some new and completely unexpected direction every two or three years, which probably accounts for this roughly speaking orchestral work.

Whilst I'm sceptical as to whether Molti Nemici Molto Honore was really recorded with a full orchestra, and close inspection exposes some moderate use of sampling, all bets are generally off where Mr. Martin is concerned, and it at least sounds very much like that which it purports to be in terms of recording and - crucially - composition. In other words, this has much in common with yer legitimate classical types, and nothing obviously in common with the martial industrial school of orchestral twattery.

Keeping in mind that my own understanding of classical composition is fairly limited, Molti Nemici Molto Honore is Schoenberg with a bit more of a tune, or at least a coherent series of themes emerging from the orchestra falling down a flight of stairs opening. There is an initial element of controlled chaos although this soon reveals itself as purposeful, working towards some sort of harmonic goal, and the emotional import of this goal is revealed in the subtitle, Music for the Last Day on Earth. It's hardly the first time such notionally apocalyptic ambition has been tackled by a musician, particularly one with at least a few minor skeletons in the cupboard of industrial subculture, but UNIT evokes the overpowering sorrow of its canvas by entirely musical means rather than the perhaps more traditional shock tactic of electronic noise. For the sake of argument and regardless of how it came together, one may as well admit defeat and term the four parts of Molti Nemici Molto Honore a symphony, because that's what they amount to as the themes develop, taking in the aforementioned electronic noise - albeit a variation owing more to Delia Derbyshire and Pierre Schaeffer than to any of the usual suspects - and even bringing in a passage of William Burroughs reading Towers Open Fire without losing the momentum to the fact that almost every other muppet to ever wheel out Burroughs has generally ended up sounding like a complete clown.

As a member of UNIT, I was always impressed by Andy's musical literacy which was such to at least have attracted the attention of serious composers such as James Dillon. Of all the musicians I've ever known, he is possibly the only one capable of pulling together a symphony amounting to something more than just fifty minutes of noises, and incredibly he now appears to have done just that, by some means or other; and it's probably one of the best things he's ever done.


It has come to my attention that Molti Nemici Molto Honore, meaning many enemies, much honour is a slogan derived from Italian Fascism, famously adopted by Ezra Pound and inspiring the title of a song by Death In June. Whilst I like to think I know Andy Martin reasonably well, and so have few doubts as regard to his intention, I feel that aside from anything, this does rather leave me looking like the twat who brought that funny little Von Thronstahl man along to the dinner party and is now discretely circulating amongst guests explaining no, it's okay really, it's just that he doesn't like reggae.  That's all it is. I tend to believe that artists should be judged by their own testimony, and so I can't really speak for UNIT - who just for the sake of clarity, were originally named after something from Doctor Who rather than it being the more neighbourly form of Authoritarian Punishment Unit or whatever - but I should probably at least qualify my interpretation of this unfortunate reference. For starters, it's nothing to do with Death In June whom my client has summarised as a bunch of clowns on a number of occasions, and I suspect it's probably nothing deeper than a phrase he found amusing - there being a certain brutal poetry in the language of totalitarianism - for the same reason we both once spent a good hour or so chuckling over Saddam Hussein's promise of a war which would produce a line of bodies with a beginning, and no end! The Fascist source might be regarded as a bonus in that it's likely to piss some people off, woolly liberal baiting being an act from which Andy Martin has been known to derive some pleasure from time to time. I can see where he's coming from in so far as much of the three or four previous albums were dedicated to the subject of his enemies, specifically previous members of the band - thankfully not including yours truly - and I can see where he's coming from in so far as he was treated very badly by a couple of them and was left justifiably furious. That said, I really wish he'd chosen some other title here. Aside from that I can't see how it relates to the content of the actual CD, I'm not sure its author really appreciates how many of the evil fuckers are now out there taking this sort of association absolutely seriously. Anyway, that's how it looks to me.

I'm not actually sure how you're supposed to get hold of this, but you might try the link to the UNIT website in the left hand column of this page under Some Stuff.
Posted by Lawrence Burton at 08:28